Parsing html to get the data we need can be very frustrating. Lucky, Mathematica has a powerful hmtl import function, you can import raw html data into several different formats. In my experiences, import html as "XMLObject" is usually the best way to go.
Here is an example: OSCAR Nominees:

Extract the number of nominees:

Put these two together:

Let's draw a graph to show the top 10 of the most nomineed films: 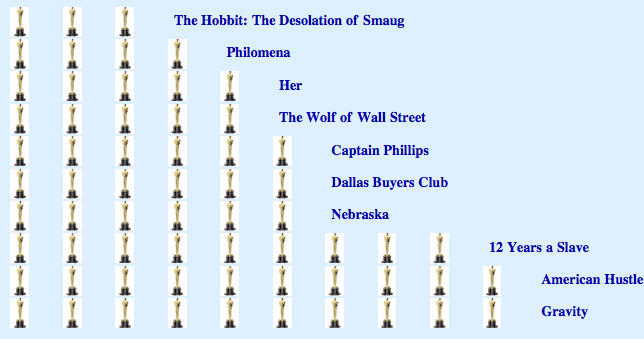 For this particular example, you can also try to get the same information directly from WolframAlpha.

3 comments:
Email ThisBlogThis!Share to TwitterShare to FacebookShare to Pinterest

A few questions on geospatial coordinates transformation have shown up in Mathematica.Stackexchange. Here is a very brief summary.

In US, you probably likely deal with two projection systems: State Plane Coordinates System and UTM.

In GeoProjectionData, SPCS83IN01 and SPCS83IN02 represent Indiana Steate Plane east zone and west zone. SPCS83TX01 ~ SPCS83TX05 represent 5 zones from north to south in Texas. Tennessee has only one zone: SPCS83TN00. Here is an online interactive map on SPCS.

There are also SPCS27 series, which are based on NAD27 datum, however, it is quite rare to get the data in the old coordinate system.

One common mistakes is usually caused by the unit: meters vs feet. In Mathematica, the coordinate is calculated in meters, the data you get is probably in feet.

In Mathematica 9, there is a problem with UTMZone data:

This problem is fixed in next version of Mathematica.
2 comments:
Email ThisBlogThis!Share to TwitterShare to FacebookShare to Pinterest
Newer Posts Older Posts Home
Subscribe to: Posts (Atom)